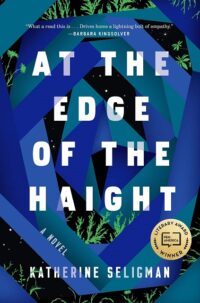 On the surface. At the Edge of the Haight seems set up to be a mystery/thriller about Maddy, a homeless 20-year-old living in San Francisco who happens to witness the final seconds of a murder. And it is a mystery. But the biggest part of the story is that is pulls back the curtain on the gritty, dangerous lives of the many homeless youth who live in the shadow of the Golden Gate Park.

Maddy has cobbled together a street family of sorts, fellow teens and twenty somethings who’ve banded together to help each other survive. They follow a routine: free breakfast from the shelter, panhandle or give unsuspecting tourists tours of the Haight during the day, set up together in the park to sleep at night, roll up their possessions and try to vacate the park in the morning before the cops run them out.

One night on the way back to their designated sleeping spot, Maddy (and her constant companion, her loyal dog Root) literally stumble over the body of a dead teen. He’s been murdered and it’s fresh, so fresh Maddy spots a figure running away from the scene. A terrified Maddy tries to keep what she saw to herself – both out of fear of the fleeing suspect finding her or her distrust of the cops – but eventually the police and the dead boy’s parents discover that Maddy was there, and they bring her into the investigation.

As the cops and parents investigate, the reader gets immersed in life on the street for kids like Maddy. We wonder how did she get there? How did her friends find themselves on the street? We see them both through the eyes of tourists passing by and either pretending they’re not there; or the ones who ask if they can take their picture. Most of them drink or use drugs to endure their life. It’s gritty, and sometimes hard to read.

Little by little we get clues – both as to how the boy was killed, and how Maddy’s life led to her homeless life. The boy’s parents take an interest in Maddy, hoping to save her where they couldn’t save their son. As a reader, I wanted to save her too. And her dog. And her sweet but hapless boyfriend.

The final word: At the Edge of the Haight is a gritty, raw, slow burn of a book that is an unflinching look at life – and death — among the homeless in San Francisco.