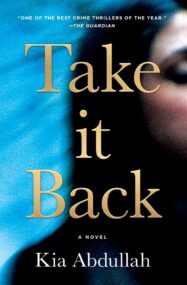 I don’t know about you, but sometimes when I read a certain kind of book, I can totally visualize the movie version or Netflix miniseries, even the actors should play which characters. Take It Back is one of those books. And Riz Ahmed is that actor (I mean, I think he should be cast in everything, but I digress).

Take It Back is a mystery/thriller with brilliant London lawyer Zara Kaleel as the central character. She defies her family’s plans by leaving an arranged marriage and a high-paying, high-profile legal career to use her talents to fight for victims of sexual assault at a non-profit. The consequences of her choices change her life, estranging her from her family and causing her to rely on a steady flow of Xanax to tamp down any emotions she feels as a result.

Her latest case involves Jodie, a 16-year-old girl with extreme facial deformities. On top of struggling her whole life with bullying and mocking by others and living with a mean, alcoholic mother, Jodie tells Zara, she was horrifically raped at the hands of four classmates. And these classmates, like Zara, are Muslim immigrants.

Zara agrees to help Jodie and quickly finds herself in a struggle between fighting for truth and justice for her client, while facing accusations of being a traitor to her own community.

The case eventually goes to trial and becomes one of the most controversial criminal trials in London history. In the process, it also tears the Muslim community apart. I, too, felt similarly conflicted: Who is to be believed? And to what degree? As details from the night of the alleged rape unfolded, I went back and forth wondering who was telling the truth.

And then, just when you think you’ve figured out what really happened … BOOM! The big twist. At the very end.

THE FINAL WORD: The disturbing story, Kia Abdullah’s brilliant writing and the real-world parallels make Take It Back a riveting read. Highly recommended!

And a note to the filmmakers who are wise enough to snatch up the rights to this story, I have two words: Riz Ahmed.