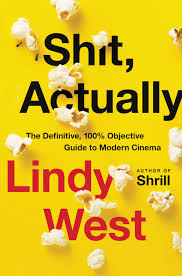 Reading Shit, Actually: The Definitive, 100% Objective Guide to Modern Cinema is like becoming ensconced in an comfy, cozy couch on a rainy Sunday, channel surfing until you find one of those movies you’ve already seen but you’re like, “I could watch this again.” Then settling in for the rewatch with your funniest friend who picks apart the plot holes and character flaws you never noticed before—and makes you laugh your ass off in the process.

A hilariously outspoken writer, comedian and activist, West is probably best known from her 2016 memoir Shrill: Notes from a Loud Woman and/or its small-screen adaptation Shrill, which premiered on Hulu in 2019. She uses her real-life experience as a writer and executive producer on Shrill and former movie critic, as well as being a certified cinephile and pop culture addict, to take a second—sarcastic and just-the-right-amount of critical—look at more than 20 contemporary movie “classics.”

From Face/Off, Garden State and Titanic to Harry Potter, Reality Bites and Shawshank Redemption (oh, yes, she did!), West skewers them one by one. And thanks to her, I’ll never look at any of them the same way again.

THE FINAL WORD: There are two kinds of people who will truly appreciate this book: 1) people who are already fans of West and her humor; and 2) anyone who saw Titanic and screamed at the screen as the old lady casually tossed the “The Heart of the Ocean” INTO the actual ocean knowing the guy from Twister and one of those astronaut movies dedicated his life to finding it but never did because she had it the WHOLE TIME—but not after making him listen to, like, three hours of her Titanic story first.

And let’s not even get started with whether or not that door could have held poor Jack, too.