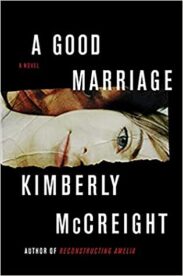 For me, a good beach read is either a light, sunny story that requires very little of my overtaxed brain except to enjoy the escape; OR a mystery thriller that puts my mind into overdrive trying to unravel the whodunit, completely absorbing my brain and blocking out the real world.

For me, A Good Marriage was the latter, and it was totally absorbing. It’s a legal thriller/murder mystery by Kimberly McCreight (I’m a huge fan of her previous book Reconstructing Amelia).

At the core of the story is a brutal murder that happens in the Park Slope neighborhood of Brooklyn, a neighborhood which looks picture perfect. But much like on Instagram, the images projected are often covering up real life—where seemingly flawless families and couples have plenty of secrets hidden behind the posts. Take for example, the murder takes place the night of the neighborhood’s annual “key party.” After the sweet, pretty wife of a tech millionaire is found dead at the foot of the stairs of their mansion, her husband, being held at Rikers Island prison, contacts his former law school colleague Lizzie to help prove his innocence. From there, his secrets, his wife’s secrets, the neighbors’ secrets and Lizzie’s secrets come to light with twists and turns that remind us you never know what is REALLY happening behind closed doors.

THE FINAL WORD: For me, A Good Marriage was the perfect summer read, a true page-turner that kept me engaged from beginning to end. It’s like HBO’s Big Little Lies and The Night Of and Netflix’s The Staircase had book baby.