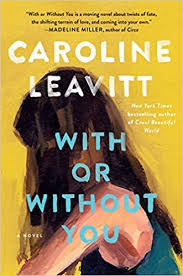 You’ve probably seen those Dateline or 20/20 stories about people who wake from a coma with a talent they never had pre-coma, like speaking fluent French, playing the trombone or juggling. That “wake up,” both literal and figurative, is the set up for Caroline Leavitt’s With or Without You. Following the success of Cruel Beautiful World (which I loved!), this novel details the way in which a coma upends the lives of its main characters. (Life taking an unexpected, unwanted, 180-degree turn sounds kinda familiar right about now, huh?)

The story begins in the living room of longtime couple Stella and Simon, who are in the midst of a late night argument. Stella is a responsible nurse, while Simon is a languid rock musician whose star has dimmed considerably since they’ve been together. It’s the eve of Simon’s departure for a possible comeback tour, and they’re revisiting a recurring subject. After 20 years as a couple, Stella is ready to settle down and have kids, but Simon wants to stay untethered to keep chasing his music dreams. They fight. They drink. Pills are introduced … and Stella’s in a coma by morning.

The rest of the story unfolds from the point of view of several characters including Simon, who’s experiencing a real role reversal having to take care of Stella; Stella’s estranged mother, who is not Simon’s biggest fan; Stella’s doctor/best friend, also in the anti-Simon camp; and Stella herself. As Stella remains comatose, life still moves forward and her “absence” and subsequent “awakening” bring about major changes, creating a domino effect that touches all of her relationships.

Leavitt’s skill as a story teller made me feel like I was right there in the middle of their little circle, both cheering for and jeering against the decisions the characters make along the way. To be so engrossed in a book you can actually picture yourself in it is a rare treat.

THE FINAL WORD: With or Without You is gorgeously constructed, full of multifaceted, nuanced characters and presented with unwavering honesty. And the book’s premise of learning to accept major life changes, especially the kind that are forced upon you, is something we can all relate to in 2020. Basically, your summer reading list is not complete without this book.

* I was invited to participate in With Or Without You’s blog tour by Algonquin Books. The book is available beginning Aug. 4, 2020.